To find out what else Action Ops: Snow & Sable has to offer, continue reading below.

Before you are ready to aid Snow and Sable in the quest for justice, you will need to know what game functions can be adjusted before each spin which we have highlighted below.

Firstly, Action Ops: Snow & Sable players should look to adjust their bet size by using the “Coin Value +/-” buttons set how many coins they wish to bet per spin. If you happen to be short on time then simply hit the “Max Bet” button to your bet to the maximum amount without having to manually adjust.

Once you have set your desired bet amount you are ready to click the “Spin” button to initiate the spinning of the reels. If you are tight for time and do not want to fuss around hitting the spin button every time you are ready to et the reels into motion, then you can also use the “Auto” button to automatically spin the reels a set amount of times that you wish them to be spun.

Action Ops: Snow & Sable features three rows and five reels, offering a total of 10 paylines to its players to win from which is a fairly standard slot design. Betting starts as low as 10p when using this Microgaming slot and stops at $100 per spin. There is no progressive jackpot on offer here but players can get their hands on the fixed jackpot prize worth 1000x their stake. 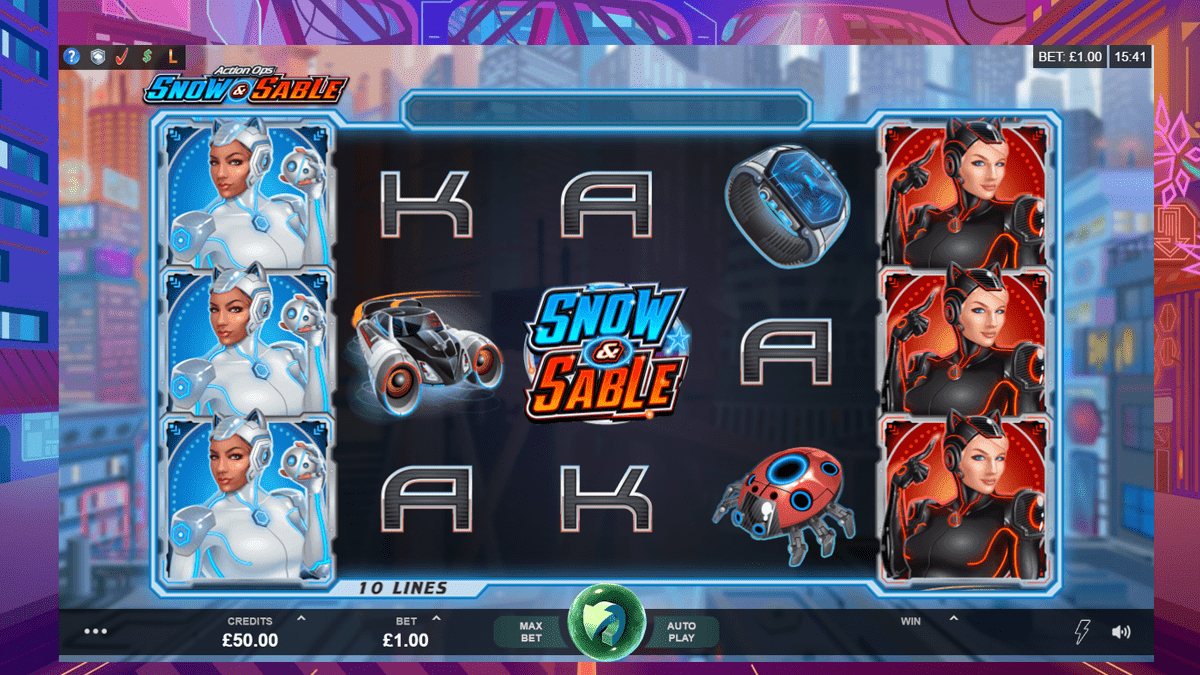 Standard playing card icons are used for the low-value symbols, which include 10, J, Q, K and A. Snow & Sable appear as symbols themselves, as well as sci-fi cars, watches, bugs and cars.

There are three wilds to be found in Action Ops: Snow & Sable, one that shows Snow and Sable together and two that shows them individually. Any of the available wilds will substitute for other symbols on the reels to create winning combinations – excluding the scatter symbol.

Landing scatters is required when attempting to trigger the free spins rounds and three are needed to do so.

The more scatters landed will, in turn, lead to more free spins and better multipliers. The following multipliers are available – x2, x10, x100 – which are awarded accordingly for 3, 4 or 5 scatters.

Although there may be no progressive jackpot on offer and Action Ops: Snow & Sable’s design looks slightly outdated, this Microgaming slot is packed full of interesting features to keep its player entertained for countless hours. Whether its stacked wilds, free spins or a jackpot prize worth 1000x your stake you are after, Action Ops: Snow & Sable has it all.