Arcade Bomb by Red Tiger Gaming is an interesting classic fruit machine slot that has a slightly retro theme to it. From the dark blue background and fluttering lights that look like distant stars, Arcade Bomb looks to be set in space which makes for a calming game theme. Being a classic fruit machine, the reels are packed-full with different fruit symbols, including watermelon, oranges, cherries and lemons. There are some unique and exciting bonus features included in Arcade Bomb, which you can find out about below in this article.

How to play Arcade Bomb Slot

Before you are free to enter space and spin the reels on Arcade Bomb, you will need to know what game functions can be adjusted before each spin which we have taken the time to highlight for you below. 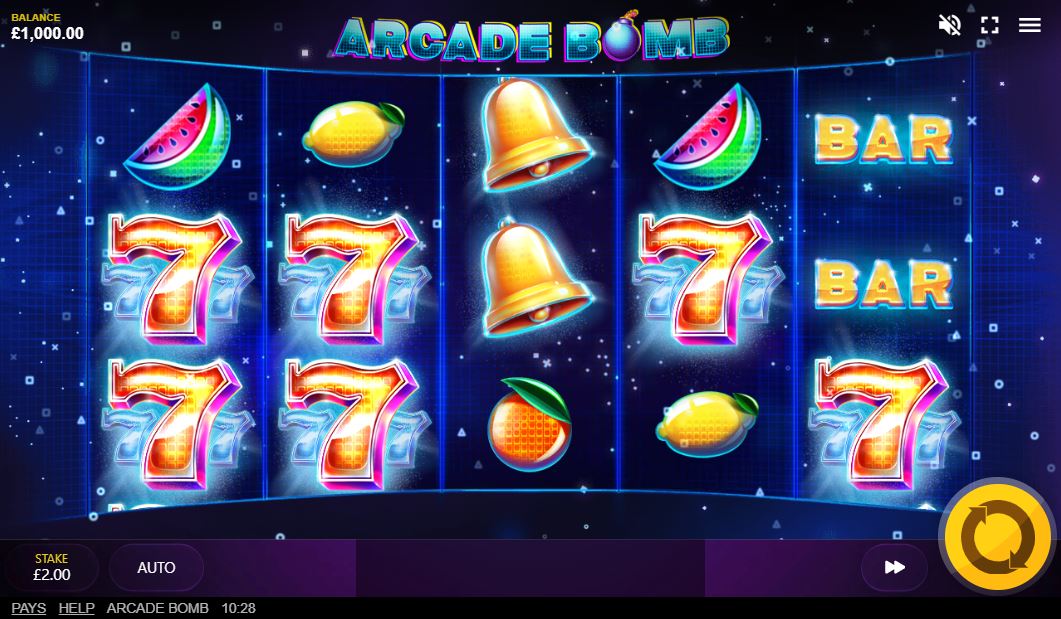 Firstly, Arcade Bomb players should look to adjust their bet size by using the “Coin Value +/-” buttons to set how many coins they wish to bet per spin. If you happen to be short on time then simply hit the “Max Bet” button to your bet to the maximum amount without having to manually adjust.

Despite being a classic fruit machine, Arcade Bomb features three rows and five reels. From these reels, a total of 20 pay lines can be won. Betting on Arcade Bomb starts from as low as 20p per spin and ranges up to $100 per spin. No progressive jackpot is on offer, but players can win up to 1000x their stake.

As a bomb-themed slot game, these are vastly popular and exciting

All symbols are theme-related on Arcade Bomb, with the majority of symbols made up of classic fruit symbols, which include lemons, watermelon, oranges, cherries, and strawberries.

The Arcade Bomb video slot offers an RTP figure of 95.47%.

During Arcade Bomb the locked reel bombs can appear on the reels at any time instead of the standard fruit symbols. Following this, they will remain locked in position for anywhere between one and nine spins. When the bombs do happen to explode, they leave the exact same pattern behind on the reels.

There are no wilds on Arcade Bomb at this point in time.

There are no scatter or free spins included on this Red Tiger Gaming slot.

Arcade Bomb is a great example of a slot that manages to combine a classic theme with some modern features, and the outcome is impressive. Based around a classic fruit machine, the aesthetic features of Arcade Bomb are very appealing and combine this with the unique locked reel bomb feature and you have an incredibly fun slot. Also, with an RTP figure sat at 95.47%, Arcade Bomb will award payouts more often than not which is always positive. Head to any Red Tiger Gaming casino today to try out their Arcade Bomb video slot.