If you are looking for an exclusive slot, then you may want to pay attention to what’s coming up, as today we take a look at Red Tiger Gaming’s Captain Rizk video slot. Captain Rizk is a Megaways slot that has been specifically developed for Rizk Casino; so you know where to head to enjoy this Red Tiger Gaming slot. Captain Rizk comes with six reels and a massive 117,649 possible ways to win and this is not all, with it featuring cascading reels as well as mystery Rizk symbols. Captain Rizk is a superhero, similar to 4squad slots, and finds himself as the main theme of this Megaways slot. You can find images of him filling the reels and the reels are colored in his symbolic red and gold.

To find out what else Captain Rizk has to offer you today, simply continue reading below.

How to Play Captain Rizk Slot

Before you are free to join Captain Rizk on the Megaways reels, you will need to know what game functions can be adjusted before each spin which we have taken the time to highlight for you below. 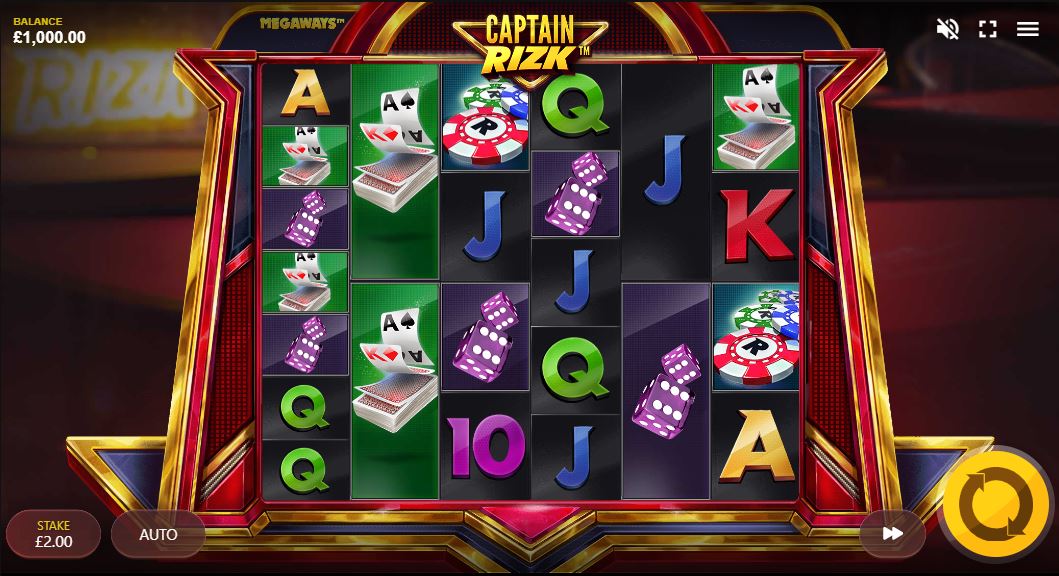 Firstly, Captain Rizk players should look to adjust their bet size by using the “Coin Value +/-” buttons to set how many coins they wish to bet per spin. If you happen to be short on time then simply hit the “Max Bet” button to your bet to the maximum amount without having to manually adjust.

As we have previously mentioned, Captain Rizk is a Megaways slot containing a total of 117,649 paylines. You will find a total of six reels on the screen which can be spun from anywhere between 10p per spin to $10 per spin.  Red Tiger Gaming has not provided a progressive jackpot with this slot, but players can get their hands on a maximum payout worth up to 10,489x their stake.

Captain Rizk has been built using the HTML5 platform, which is great news for all you mobile gamers. Captain Rizk works perfectly well on a variety of mobile devices, which includes iOS, Android, and various tablet devices too.

The low-value symbols on Captain Rizk can be spotted by the standard playing card icons, which include 10, J, Q, K. The high-value symbols are easily spotted on this Red Tiger Gaming Megaways slot, with them being featured by a selection of eye-catching symbols. These include Captain Rizk, free spins wheel, a golden trophy, a deck of cards and poker chips.

The Captain Rizk video slot offers an RTP figure of 95.65%.

Most Megaways slots come with this cascading reels feature and Captain Rizk is no different. Thanks to cascading reels, whenever a player lands a winning combination on the reels, the winning symbols are removed and replaced with symbols that fall from above, creating more winning possibilities.

You will want to keep your eyes peeled for the Mystery Rizk symbol, as this randomly appearing symbol has the ability to land on any reel and clone into other symbols. Once it has appeared on the reels, it can clone itself an unlimited amount of times across the reels, to greatly increase the chances of landing winning combinations.

Players can earn a further five free spins by landing three more scatter symbols on the reels during this feature. Also, during this feature cascading reels are active as well as the Win Multiplier feature. This means that with every winning spin players multiplier will increase beginning at 1x and the multiplier value is unlimited.

For a Megaways slot, Captain Rizk is one of the simpler versions, however, this is not a bad thing as Megaway slots can tend to be difficult and hard to understand. What makes it simpler than other Megaway slots is the limited number of features included, but even with a lesser amount, Captain Rizk still offers cascading reels, free spins, win multipliers, and a unique mystery Rizk symbol. In terms of design, Red Tiger Gaming has kept it fairly simple again by not packing too many details onto the screen.