Crazy Genie is a fun modern slot that features five reels and 20 paylines, that has been developed by Red Tiger Gaming; for all types of players to enjoy. The main character featuring on Crazy Genie is, of course, the crazy genie himself who looks very much like the genie from Disney’s Aladdin. Red Tiger Gaming has made sure that this slot stands out and has done so by adding a plethora of colour to and around the reels. When we take a look at the symbols, the colour does not stop. Players can find magic carpets, golden lamp, and ‘friendly’ looking snakes.

Red Tiger Gaming’s Crazy Genie slot is more than just a bunch of pleasing aesthetic features though, with offering exciting gameplay and a variety of lucrative bonus features. Continue reading below to find out what else Crazy Genie has to offer.

How to Play Crazy Genie Slot

Before you can rub the magic lamp, you will need to know what game functions can be adjusted before each spin which we have taken the time to highlight for you below. 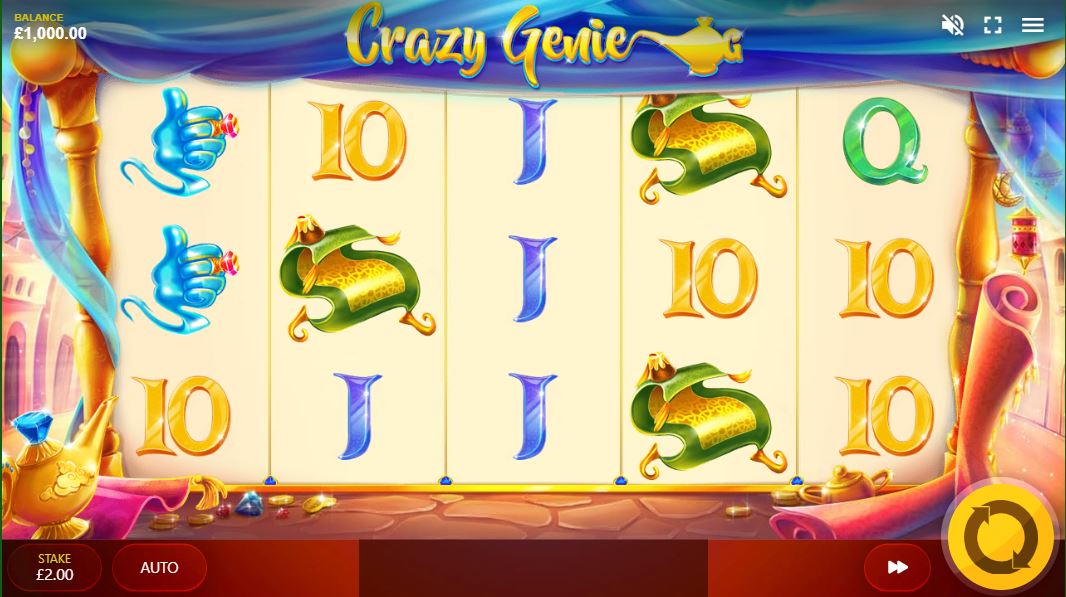 Firstly, Crazy Genie players should look to adjust their bet size by using the “Coin Value +/-” buttons to set how many coins they wish to bet per spin. If you happen to be short on time then simply hit the “Max Bet” button to your bet to the maximum amount without having to manually adjust.

Crazy Genie is one of the easiest slot games to play, taking a look at other slot games like Captain Rizk, which is very similar, you’ll find that this game is also easy, even though it’s a 5 reel game.

As already mentioned, Crazy Genie is a modern slot that features five reels and three rows. From this grid layout, players have a total of 20 fixed paylines to win from. Crazy Genie is a slot that can and will appear to a wide range of players; thanks to its large betting range. Crazy Genie can be played from anywhere between 20p per spin to $500 per spin, offering a huge variance. No progressive jackpot is on offer here, but players can win up to 300 coins from just one spin.

Crazy Genie is accessible on a variety of devices, including mobile, thanks to Red Tiger Gaming’s HTML5 platform. With the HTML5 platform in use, players can play Crazy Genie on iOS, Android and tablet devices without having to download any extra files.

Crazy Genie uses a range of standard playing card icons to represent the low-value symbols, which includes 10, J, Q, K and A. The high-value symbols are easily spotted on this slot thanks to their bright colouring and include images of a pile of golden coins, a blue-hatted snake, a magic carpet and the blue hand of the genie.

The Crazy Genievideo slot offers an RTP figure of 96.22%.

The Magic Lamp bonus feature is triggered by landing three or more of the magic lamp scatter symbols anywhere on reels two, three and four. Following this, players will be awarded with a spin on the Wheel of Bonuses. The Wheel of Bonus features the five following bonus rounds:

Oasis Bonus – Players are required to strike the lamp to shake out the hidden coins. Potential of winning up to 100x your stake.

Lamp Bonus – Players must rub the lamp to build up a multiplier worth up to 200x your stake.

Gift Bonus – Select from the gifts offered by the genie to win a multiplier worth up to 1179x your stake.

Gold Bonus – Receive a random number of free spins during which a bunch of gold coins are thrown. Those gold coins that land will reveal a cash prize or a multiplier.

Treasure Bonus – Simply select a prize from the treasure on show, to win a stake multiplier worth up to 258x your stake.

The crazy genie can appear at random during any spin and award either of the following bonuses:

Magic Lamp – This feature will award any of the Magic Lamp bonuses.

There is plenty to love about Red Tiger Gaming’s Crazy Genie slot, whether it is its eye-pleasing aesthetic features or the multitude of included bonus features. First of all, Crazy Genie is a slot that appeals to a wide range of players thanks to its large betting range and respectable RTP figure that sits at 96.22%. Not only is Crazy Genie an appealing slot, but once you have opened it you will not want to leave anytime soon. With a wide variety of bonus features, including free spins, Wheel of Bonuses and numerous multipliers, Crazy Genie is incredibly fun to play.