As you can probably work out from the title of the Da Vinci’s Mystery slot machine, this modern slot developed by Red Tiger Gaming celebrates and pays tribute to the infamous Renaissance man, Leonardo Da Vinci. It has been made to believe that during his life, Da Vinci had produced over 20,000 pages of notes and refused to let any details slide, and that’s a rule that Red Tiger Gaming has stuck by when putting together this slot. Da Vinci’s Mystery is a fairly basic-looking slot from the outside that features three rows and five reels. However, as you dive deeper into this unique slot, you begin to find some interesting features, which include unlimited free spins, increasing multipliers, and cascading reels.

To find out what else Da Vinci’s Mystery has to offer you today, then continue reading below.

Before you can unravel the hidden secrets of Leonardo Da Vinci’s mysteries, you will need to know what game functions can be adjusted before each spin which we have taken the time to highlight for you below. 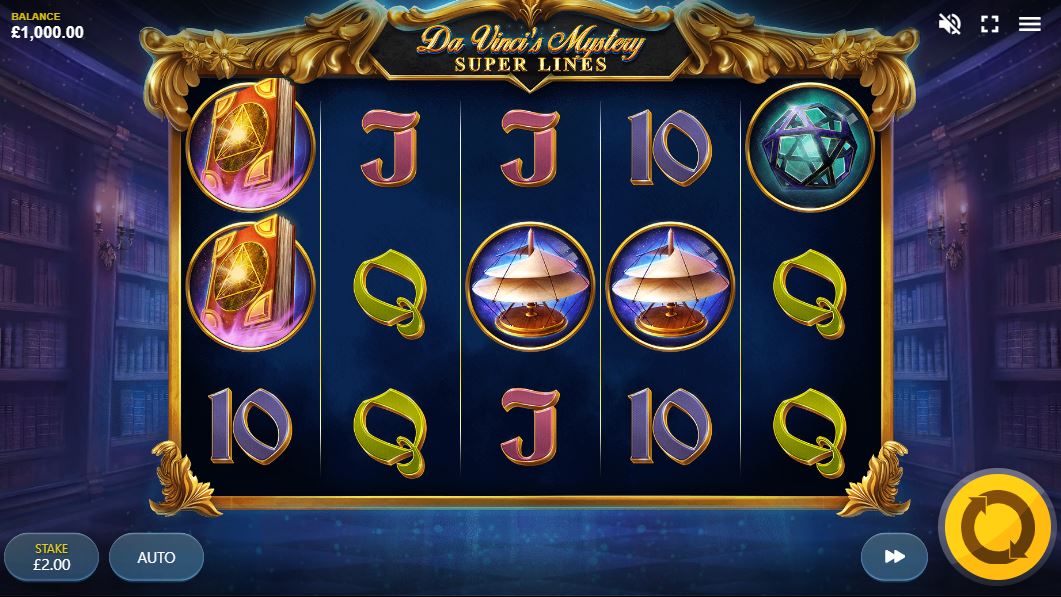 Firstly, Da Vinci’s Mystery players should look to adjust their bet size by using the “Coin Value +/-” buttons to set how many coins they wish to bet per spin. If you happen to be short on time then simply hit the “Max Bet” button to your bet to the maximum amount without having to manually adjust.

Red Tiger Gaming’s Da Vinci’s Mystery slot features a three-row and five-reel grid layout, of which a total of 10 paylines are available. The largest betting variance is not found here at Da Vinci’s Mystery, but players can still spin the reels from anywhere between 10p per spin to $20 per spin. Despite not offering a progressive jackpot, Da Vinci’s Mystery slot does provide players with a 450x jackpot prize during the base game.

The low-value symbols are represented by the following standard playing card icons – 10, J, Q, K, and A. The high-value symbols are much more eye-catching and easy to spot, which include various images of globes, Aerial screws, books, and the Mona Lisa painting.

Da Vinci’s Mystery slot uses Super Lines, which means that players can form winning combinations by matching symbols even if they do not fall on adjacent reels. For example, if four Mona Lisa symbols were to land on reels 1, 3, 4, and 5 – a four of a kind win is awarded.

During the free spins round, winning symbols will increase the multiplier for that symbol. The more symbols that form a win, will result in higher multiplier values.

Cascading reels means that whenever a player lands a winning combination, the involved symbols disappear and are replaced with new symbols from above. This feature provides players with greater winning possibilities.

From the get-go, Red Tiger Gaming’s Da Vinci’s Mystery slot is unique, to say the least. A unique theme, a unique design, and some very unique features. The only thing about Da Vinci’s Mystery that comes across slightly basic is the base game, which offers little excitement and a 450x max payout. However, the gameplay improves vastly during the free spins round which can be re-triggered an unlimited amount of times. Not only this, but cascading reels, super lines, and symbol multipliers are all active, providing some exciting gameplay, to say the least.