Despite the small betting variance, there are plenty of exciting bonus features available on this Red Tiger Gaming slot which can all be found out below.

Before you are free to enter the dragon’s lair and spin Dragon’s Fire Megaways reels, you will need to know what game functions can be adjusted before each spin which we have taken the time to highlight for you below.

Famous Dragons based game ‘Wild Dragon Slot‘ by Golden Hero has been named one of the easiest slot games on the market. The classic spin and dragon/Asia theme is prevalent in both. 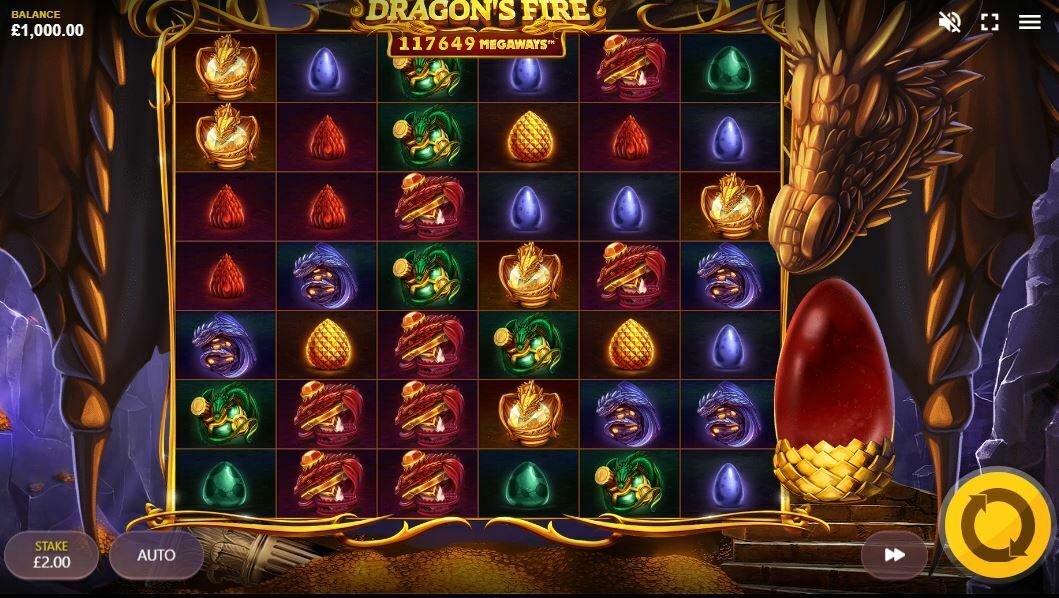 Firstly, Dragons Fire Megaways players should look to adjust their bet size by using the “Coin Value +/-” buttons to set how many coins they wish to bet per spin. If you happen to be short on time then simply hit the “Max Bet” button to your bet to the maximum amount without having to manually adjust.

Dragon’s Fire Megaways is a big slot in terms of reels and rows, with it featuring a 6×7 grid layout. With all these reels on offer and due to the Megaways mechanic, players have a total of 117,649 paylines to win from. As previously mentioned, this Red Tiger Gaming slot does not offer the largest betting range, with it spanning from just 10p per spin to $10. Despite the low betting range, players can win up to 10,470x their stake from just one spin.

All symbols found on Dragons’ Fire Megaways are theme-related which makes it a great looking slot. The lower-value symbols are represented by a selection of different coloured dragon eggs, which include red, gold, blue, and green. The high-value symbols are easily spotted as these are displayed by a selection of dragons and include red, green, blue, and gold.

After every spin, the row of symbols can change, giving players up to 117,649 ways to win.

At any time, the dragon may breathe fire onto three reels, revealing up to four wild symbols on each of the three reels. However, if only two reels are ignited with flames, a scatter symbol will appear.

This bonus feature can randomly appear at any time and will award players with a 10x multiplier boost.

To trigger the free spins round, players will need to land a minimum of three scatter symbols on the reels at any one time. Following this, players will be awarded a random number of free spins between 10 and 20.

This is not all, as during the free spins rounds players still earn progressive multipliers but this time around they can decrease when landing a non-winning spin. The active multiplier can be carried back into the base game once players use all their free spins.

If players only manage to land two scatter symbols on the reels, the dragon may take pity on you and provide you with the third missing scatter to trigger the free spins round.

These video slots bonus features come in a wide variety offering players progressive multipliers, free spins, scatters, multiplier boosts and many others. With all this on offer, there is plenty to be won on Dragon’s Fire Megaways and you can try out this slot at any Red Tiger Gaming casino today.