If you fancy finding out what else Dragon’s Luck Megaways has to offer, continue reading below.

Before you can jump into this Red Tiger Gaming slot and begin spinning the reels, you will need to know what game functions can be adjusted before each spin which we have taken the time to highlight for you below. 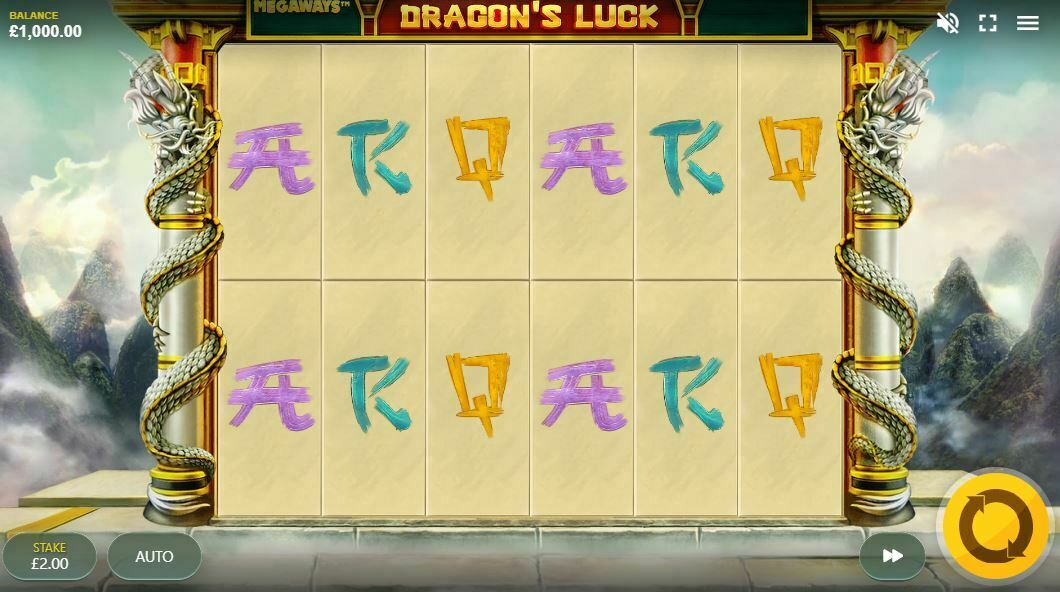 Firstly, Dragons Luck Megaways players should look to adjust their bet size by using the “Coin Value +/-” buttons to set how many coins they wish to bet per spin. If you happen to be short on time then simply hit the “Max Bet” button to your bet to the maximum amount without having to manually adjust.

As Dragons and other Asain mythology come a theme in slot games you’ll likely see similar features in terms of playing the game, looking at Reel Keeper slot which is similar to its dragon theme and +/- Coin Value buttons, etc.

Dragon’s Luck Megaways is a slot made up of three rows and five reels and from this 3×5 grid layout, players have a total of 117,649 ways to win. This Red Tiger Gaming slot does not offer the largest betting range, with players able to spin the reels from anywhere between 10p per spin to $10 per spin. Despite this small variance, players can win up to 10,368x their stake from just one spin!

Fortunately for all your mobile game players, Red Tiger Gaming has developed Dragon’s Luck Megaways using the HTML5 platform which means it can be accessed on mobile devices. Not only this but thanks to the HTML5 platform, players are no longer required to download any extra files to play Dragon’s Luck. This Red Tiger Gaming slot can be played on iOS, Android, and tablet devices.

The low-value symbols found on Dragon’s Luck Megaways are represented by a selection of standard playing card icons, which includes the following; 10, J, Q, K, and A. The high-value symbols are easily spotted on the reels with them being represented by golden coins, lotus flowers, koi carp, Chinese dolls, and 138 symbols.

There are no wilds included on Red Tiger Gaming’s Dragon’s Luck Megaways slot.

There are no free spins or scatter on Dragon’s Luck Megaways.

During this feature, either a 2×2, 3×3 or a 4×4 Mega Coin symbol will appear on the reels. Following this, the symbol will then split into multiplier Dragon Coins to reveal the same random symbol.

The Dragon Coin features see a randomly chosen symbol appear on the reels. All Dragon Coins will reveal the same symbol.

The Dragons Blessing feature will become active once the Dragon Coin symbols have landed on the reels and revealed a random symbol. Once activated, the two dragons found either side of the reels will breathe fire onto the reels. Then, they will flip the Dragon Coins again but this time to a higher value symbol, leading to larger payouts.

For a Megaways slot, Red Tiger Gaming’s Dragons Luck Megaways slot offers some rather simple gameplay. However, despite this, there is still plenty of fun to be had on this Chinese dragon-themed slot. The main attraction on Dragon’s Luck Megaways slot asides from the huge amount of paylines is by far the maximum payout value, which sits at over 10,000x players’ stakes. One of the few downsides to this Red Tiger Gaming slot is the small betting range provided, which ranges from just 10p per spin to $10 per spin.

This small drawback is over-shadowed by the available bonus features which can be very rewarding to players and include Dragon Coins, Mega Coins and Dragon’s Blessing. With all this on offer, we advise heading to a Red Tiger Gaming casino to try out Dragon’s Luck Megaways.