How to play God of Wealth

God of Wealth is a Red Tiger slot game that was first released back in December 2015. This slot game has a number of functions associated with it that can be adjusted and you will need to know what those are before you are able to begin playing God of Wealth. The first and most important is the size of your bet, which you can adjust by clicking the stake icon in the bottom left corner of the screen. 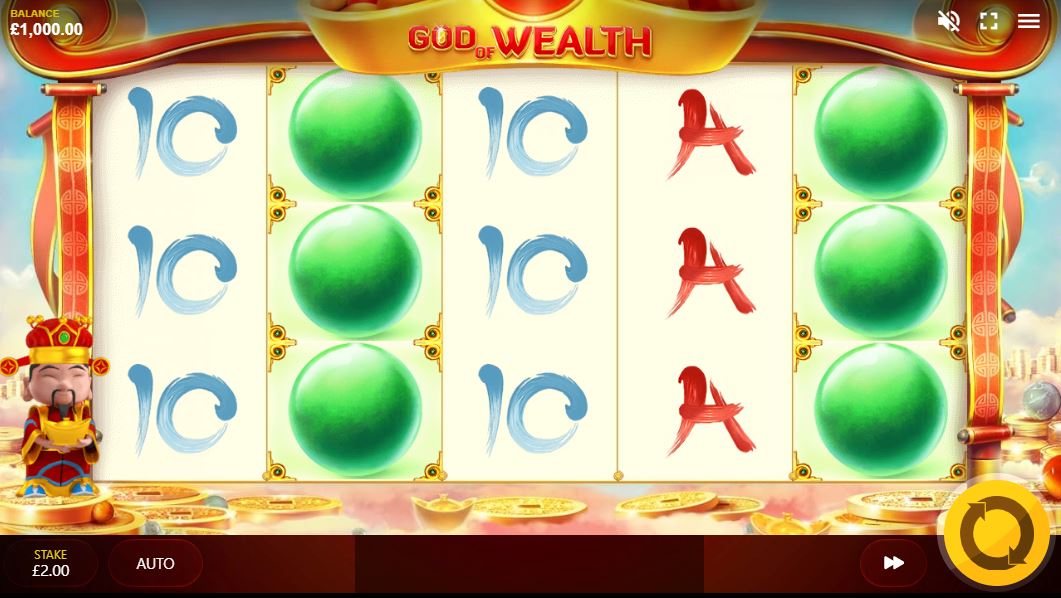 Players will at this point be presented with a list of different stake amounts and you should select one that you feel comfortable playing with on multiple spins. Press ‘auto’ to use the autoplay feature, where you can have a selected number of spins completed for you at a set stake at the click of one button. God of Wealth will allow you to complete 10, 20, 30, 50 or 100 spins at once using the autoplay feature.

There are a number of bonus features available to players when they play God of Wealth, with these bonuses having the greatest earning potential behind them. Land any one of the following bonus features and you will have a golden opportunity to come away with a significant win from your stake. Instantly, landing three, four, or five Wilds in a row will earn you 50, 100, or 500 coins respectively from your spin. Players can also land Random Wilds as part of a Random Wilds feature at any time in addition to the standard Wilds to boost your winnings even further.

The next bonus feature within God of Wealth is the Scroll Bonus Feature, which is triggered when you land three Bonus symbols anywhere on the reels within the same spin. Players must choose from one of the three scrolls that are then presented on the screen, with players being able to continue selecting from the scrolls and accumulating their winnings until they reveal ‘collect’. At this point, the winnings that you have accumulated across the Scroll Bonus feature that will then be added to your account balance.

Then comes the Free Spins bonus feature, which is one of the most rewarding bonus features of this game. Three Free Spins symbols across the reels will trigger this feature and the number of Free Spins that you will be rewarded with will be dictated by the God of Wealth protagonist. There is also a giant 3×3 wild symbol added to the reels which can make your win even greater.

We enjoyed our experience of playing God of Wealth and were left impressed by a very well put together game, just as what you would expect from a Red Tiger Gaming slot. The theme was enjoyable and we also found our time playing the game to be particularly rewarding to our account balance. God of Wealth is certainly enjoyable and a game that should be on your list of slots to try in the not too distant future.