Why Use Paddy Power For Boxing Bets?

Boxing is a great sport to watch and can be even more thrilling if you put a well-thought-out and well-researched bet on the outcome of a big fight.

You would have made a good profit if you thought Deontay Wilder and Tyson Fury were too well matched to be a clear favourite in their clash at the end of 2018 and put money on a draw. Backing Anthony Joshua against an unfavourable opponent would yield fewer returns, but if you find a good deal and a position at a respectable stake, it could still be a lucrative, safe bet.

What can make boxing bets more lucrative with Paddy Power is the Boxing Specials that Paddy Power regularly put on and if there isn’t a boxing special promotion being run for an event, then you can sign up and take advantage of the Paddy Power Welcome Offer if you don’t have an account with them right now. 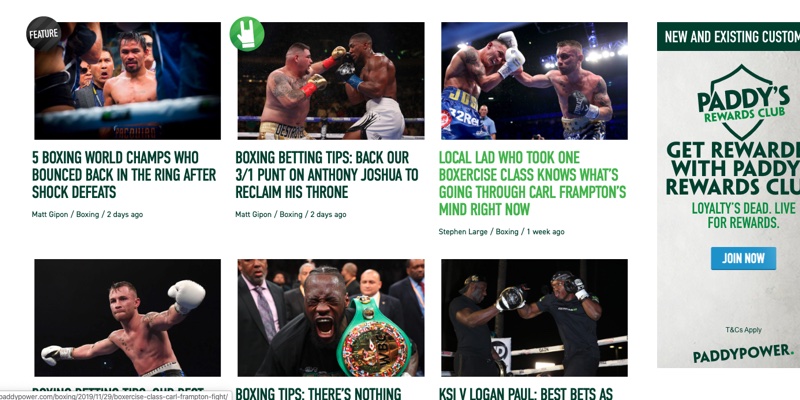 There are several different types of bets that you can place on boxing and Paddy Power Boxing has a great selection of markets available to you..

Simply bet on a chosen fighter with Paddy Power to win a particular contest. This is equivalent to a full-time bet on a team to win a football match or a picking a horse to win a particular race. If the fighter were a 7/1 unfancied contender for the win and you backed him with a $10 stake at Paddy Power, his unlikely triumph would win you $70, and you’d get back your stake.

Will The Fight Go The Distance?

This means placing a bet on the fight to complete its course and last until the end of the final round. You can bet on this as a “yes” or “no” choice and predicting it is a pretty tough case. You will need to learn a decent amount about each fighter’s form and technique to determine correctly that a fight is going to go the distance. Paddy Power does offer great odds for this type of boxing bet and it’s listed in the default view in the Paddy Power Boxing section as it’s quite a popular bet with punters.

If you are sure that a fighter will come out on top in a particular boxing match or in your opinion a boxing match will end in a draw, adding Method Of Victory to your selection brings an extra dimension to the bet and will also offer increased odds. With Paddy Power Boxing your choice is Points / Decision, a KO / Technical KO or a Draw.

This is listed under popular bets area in the Paddy Power Boxing section of their website.

Boxing Round Betting At Paddy Power

Do you have a clear view of how the fight will eventually end? If the odds for the win alone look a little low, you can also guess which round of your fighter will ensure the victory and put a wager on it. For this type of bet, Paddy Power typically offer great odds.

Grouped Round Betting With Paddy Power

A similar concept to boxing round betting but with slightly lower odds you can decide if a win will come in a group of rounds. You can typically place a boxing bet on the fighter to win in the first three rounds, 4-6 rounds, 7-9 rounds or 10-12 rounds with this type of bet.

Over / Under Rounds Boxing Betting With Paddy Power

This type of bet helps you to decide if a boxing match begins before or after a certain number of rounds. So if you think the fight will go over 7.5 rounds and put some money on it, given that after one minute and thirty seconds of the eighth round, both fighters are still in the game, the bet pays off.

General Rules Of Boxing To Consider When Betting

There are a few things to keep in mind when it comes to boxing and the main rules that apply to the results you are betting on.

These are the main rules for a professional boxing match:

The winner keeps his or her title(s) when draws happen in title fights, but the loser typically has a strong case for an immediate rematch.