If you have ever dabbled with online slots before, then chances are you have come across the immensely popular NetEnt video slot Starburst. Starburst is not only NetEnt’s most widely used video slot but the most popular slot ever to exist! However, if being the most popular slot ever is not enough to convince you to try it out, then continue reading below to see the extent of what Starburst has to offer. The Starburst reels are filled with bewildering jewels and winning combinations require players to land certain jewel patterns. If you wish to find out what bonus features are on offer with Starburst, then continue reading below.

How to Play Starburst Slot

Before you are free to set the reels of Starburst into motion, you will need to know what game functions can be adjusted before each spin which we have highlighted below.

Firstly, Starburst players should look to adjust their bet size by using the “Coin Value +/-” buttons set how many coins they wish to bet per spin. If you happen to be short on time then simply hit the “Max Bet” button to your bet to the maximum amount without having to manually adjust. 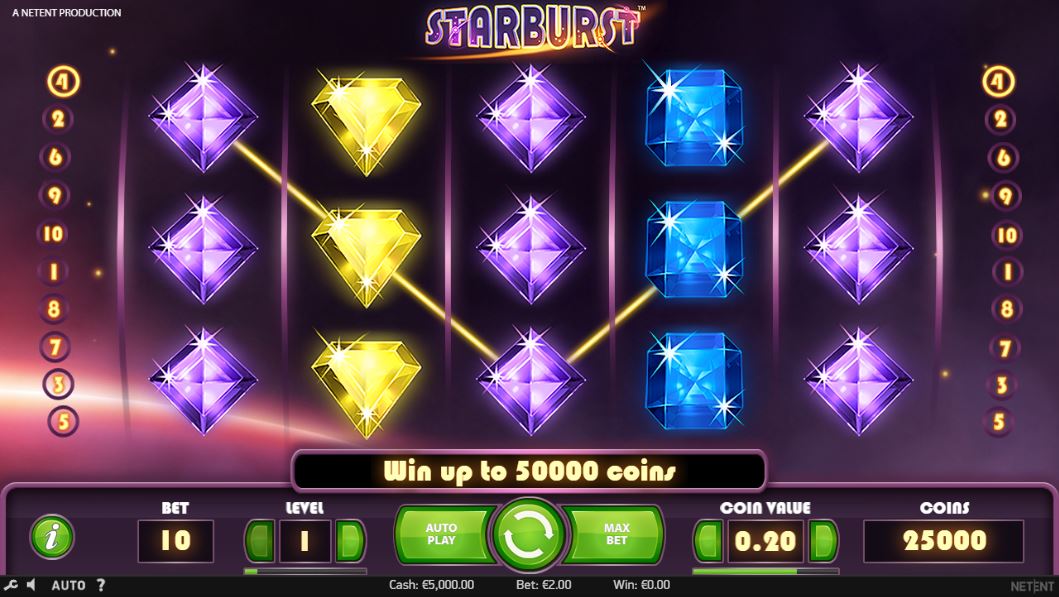 Once you have set your desired bet amount you are ready to click the “Spin” button to initiate the spinning of the reels. If you are tight for time and do not want to fuss around hitting the spin button every time you are ready to et the reels into motion, then you can also use the “Auto” button to automatically spin the reels a set amount of times that you wish them to be spun.

Starburst is an ordinary-looking slot with it featuring three rows and five reels, offering a total of 10 pay lines. Starburst offers a decent betting range for its players with them able to wager anywhere from 10p per spin to $100 per spin. No progressive jackpot is on offer with this NetEnt slot, but players can chase the fixed jackpot worth 500x their stake.

The symbols found in Starburst are made up of different jewels that vary in colour, which include green, blue, purple, orange and yellow. On top of those, players can find bars and lucky red 7 symbols.

The Starburst video slot offers an RTP figure of 96.09%.

Starburst’s expanding wilds are by far its biggest and most appealing feature. Starburst wilds will only appear on reels 2, 3 and 4. When one wild symbol appears on the middle reels, the Starburst wilds feature will be triggered.

Following this, the wild will then expand over the entire reel to make a wild reel and this will remain in place with a free respin being awarded.

Starburst does not offer free spins, but players can receive free respins when they activate the previously mentioned Starburst wilds feature.

Before we summarise, you can play Starburst on casinos like Temple slots or Leo Vegas, so either or you’ll be able to play Starburst.

You may be thinking that Starburst is a simple slot and you would be right in thinking so, as it is a very simple slot with minimal bonus features. However, Starburst’ simplicity is what makes it an incredibly popular slot and although bonus features are limited within this slot, players can make the most of the rewarding expanding wilds feature and try to get their hands on the 500x stake jackpot prize.